“After a two-year absence due to the COVID pandemic, it was good to have the sport back and see players on the courts enjoying the game again,” said Bocce Australia President Frank Funari.

The 50th Men’s Senior and the 25th Women’s Senior Championships attracted a star-studded line up of 28 teams, representing teams from all corners of Australia, contesting in the five bocce disciplines: the traditional events of Singles, Doubles and Triples, along with the throwing event of Precision Throw and the more exciting Progressive Throw event.

To make this a memorable milestone and to reboot the sport, Bocce Australia decided to expand the number of teams to allow affiliated clubs to enter a men’s and women’s team. This proved to be a success as many of the clubs took up the challenge and participated, and they did so well.

It was thrilling to watch the first-timers, who were very competitive, as for many it was their first time participating in a national elite competition and to be pitted against some of the ‘best of the best’ bocce players across Australia.

The championships had many newcomers, in both the women’s and the men’s divisions – the Veneto Club, Melbourne who after a few years of rebuilding, was back with a force winning the Australian Club Championship. The team had a star-studded line up of bocce names — Favrin, Velo, Pozzer, Gatto and Di Federico — all offspring of past top bocce players that represented the Veneto Club and Victoria.

Winning most games, it came to the last event and Marconi won, equalling with the Veneto Club on match points which necessitated a countback of the points of ‘for’ and ‘against’, resulting in favour of the Veneto Club and winning the prestigious title of Top Australian Bocce Club for 2022.

Other first-timers were the NatBA team comprising of sisters Ava and Chiara Tomasi, along with Carlo Bunin and Vinay Singh. They were teamed with experienced competitors Max Tricarico and Team Manager Ann Fiorevanti.

Also competing were the clubs of Casa D’Abruzzo, Lazio-Marche, Club Marconi, two teams from the Veneto club and the Sunshine club. It was the first time competing in a Nationals for many of these players and they all did well and were exciting to watch. They were pitted against the elite units from Team Victoria (Vic Metro, NEBA, and Morwell), Team NSW, Western Australia the men’s team, Bundaberg Men’s, ACT/Cooma, SA and the Redlands power teams, which made this a fantastic championship. 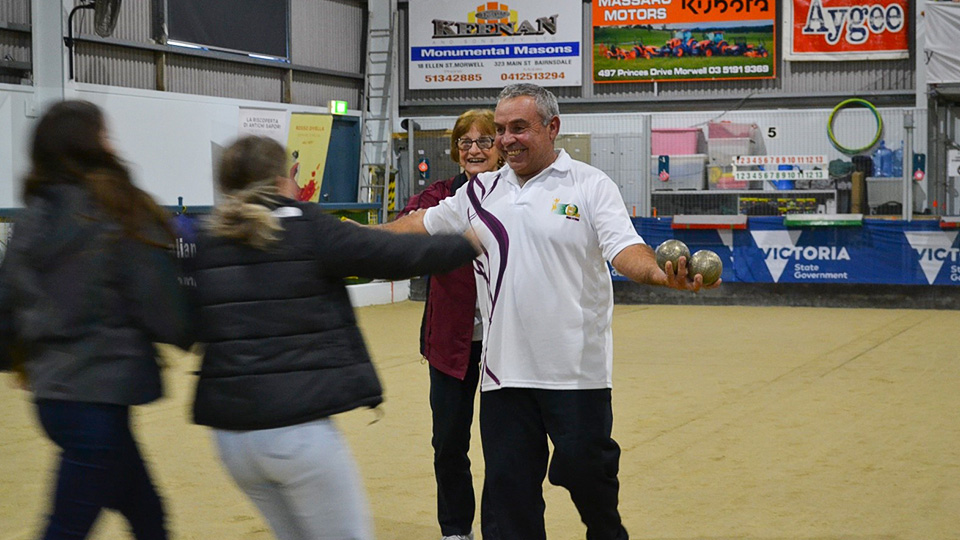 Enzo Tomasi winner of the Men’s Singles and Best & Fairest, is joined by his daughters rushing to congratulate him on a great win, just after winning the Singles Title – Australian Singles Champion 2022.

The opening ceremony and the gala nights were administered by master of ceremonies Sonia Fava and Peter Cefala, who did a splendid performance of making it a memorable evening. The championship was officially opened by Madame Mayor of Latrobe City Cr Kellie O’Callaghan who participated in the traditional official bowling of the bocce bowl along with President Bocce Victoria David Marks, Italian Australian sporting and social club Gippsland, Morwell President Sam Carbone, and Bocce Australia President Frank Funari.

The opening ceremony was exciting, as was the rendition of the national anthem which set the scene for the championship. In attendance was John Inglese who was presented with a gift by Sally and her team for helping to get Morwell Bocce affiliated to Bocce Australia.

The final of the men’s Progressive Throw had a preliminary demonstration of the women’s Throw by Nicole Samsa who attempted to break her Australian record. Nicole’s total score fell short by a few points, though she managed to retain her overall throwing average. In the men’s, the Progressive throw final between Santo Pascuzzi and Daniel Samsa was a thriller, with Santo winning on the last shot with a score 35 hits from 44 throws and Daniel finishing on 34 from 47 throws.

In the women’s division, medals were shared across NSW (Triples), Vic Metro (Doubles), and Redlands (Singles), with both Redlands and Vic Metro on a tie and both being awarded the Champion Team title. Likewise, in the men’s division the medals were shared with winners Western Australia (Triples), Vic Metro (Doubles), Redlands (Singles) and the Champion team title going to NSW.

Many of the newer clubs at these championships performed  well, such as Lazio Marche, Casa D’Abruzzo and Veneto club. In the men’s division, Romeo Marino (Casa D’Abruzzo Club) made it all the way to the Singles final beating some tough opposition from NSW, WA and Gippsland and narrowly lost 6 to 7 to Redlands Enzo Tomasi in the final. It was a memorable championship for Enzo who represented Australia in the juniors and, after a 30-year absence, returned to the game winning the Australian Singles Champion title.

In the men’s Doubles final, it was a battle between the titans – NSW (Daniel Samsa, Stefano Chiandotto and David Samsa) and Vic Metro (Tony Palermo, Angelo Parisi and Dino Mikolic). After NSW had jumped out to a lead of 3 points, Vic Metro slowly composed themselves and, point by point, clawed back into the game and it was point for point up to the last end.

NSW went into the last end leading 7 to 6 points and holding the point on the ground. It was Angelo Parisi’s precision throw that displaced the opposition’s bowl, allowing a clear path for Tony Palermo to bowl. Tony’s bowling was first class with his first bowl equalling, making point and the score 7 all, followed by another bowl to take the lead and win the final of the Doubles with a score of 8 to 7 points. 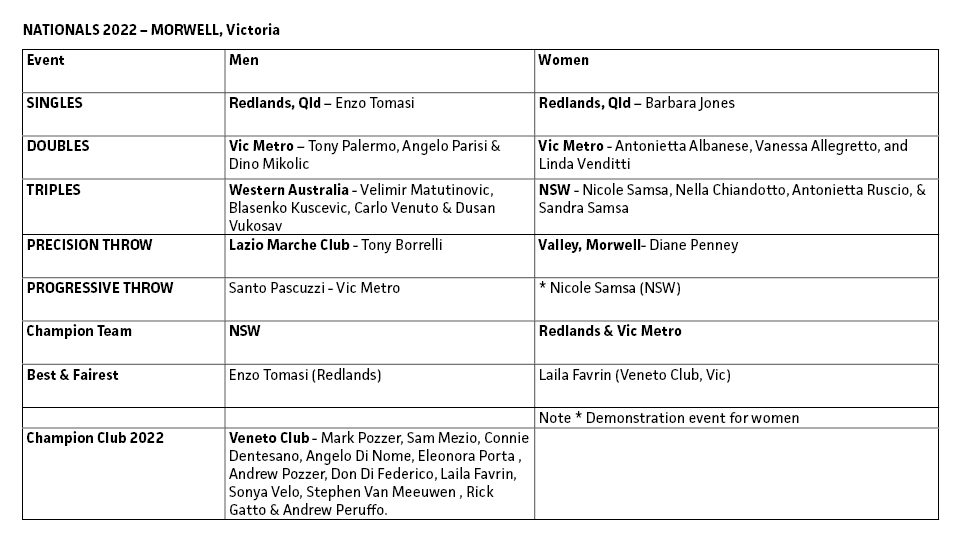 In the Triples, the final was between two power teams of Western Australia (Velimir Matutinovic, Blasenko Kuscevic, Carlo Venuto and Dusan Vukosav) and Team NSW of Stefano Chiandotto, David Samsa, Daniel Samsa. NSW, after a convincing win against their old foes, Vic Metro – 13 points to 5 points, were ‘spent’ going into the final. In the final, NSW could not manage to win an end against the power team of WA, who blitzed NSW winning 13 to 0, winning the final and the Australian Triples crown as the Triples champions 2022.

In the men’s Precision throw, it was Tony Borrelli who stormed home to win with a score of 17 points from Daniel Samsa on 15 points. The final had 10 players competing for the honour to win gold. It was sensational to watch as players scores progress, and the lead swapped a few times with Tony eventually taking the lead with 3 shots remaining and going on to win the title of Australian Precision Throw Champion 2022.

In the women’s division Singles,  Redlands (Barbara Jones) was too good beating NEBA (Mary Greco) 11 points to 2 points. In the Doubles, team NSW of Nicole Samsa, Nella Chiandotto, Antonietta Rusio, Carlo Pavi (Team Manager) and Sandra Samsa were too powerful, storming through the quarter finals beating the Valley 10 to 5 points and in the Semi Finals 13 points to 0 beating the Veneto Club.

In the final, NSW was pitted against Vic Metro (Vanessa Allegretto, Antonietta Albanese, and Linda Venditti), with Vic Metro in form, dominating every end, and winning 13 points to 3 points, the final and the title as Doubles Champions 2022.

In the Triples, it was NSW and Vic Metro again, with Vic Metro team comprising of Vanessa Allegretto, Antonietta Albanese, Linda Venditti and Elenora Porta. This time, the final was a closer game with at each end the lead swapping, point by point. In the end, NSW were too good and won 9 points to 8 points, winning the final and the title as the Australian Champion Triples team 2022.

In the Precision Throwing final, Diane Penney won with 9 points. A draw for second place between Vanessa Allegretto and Barbara Jones on 5 points apiece resulted in a second round of a ‘sudden death’ throw sequence with the first to miss to lose. After a thrilling tussle with both players throwing up to target three, Barbara Jones managed to hit the target bowl and cementing the second placing.

These championships were also the celebration of 50 years of Nationals, plus more. To commemorate this milestone, an impressive gallery of bocce posters was on display in the Bocce ‘Corridor of Honour’ along the entrance to the club reception. The display depicted the history of bocce in Australia, with many photographs of past and present bocce players, officials, clubs, and achievements of Bocce Australia. The display was the brainchild of Bocce Australia was a great attraction at these championships.

The team of the half-century inductees were honoured and very humble with their selection. The speeches by the inductees were memorable, some very emotional and others humorous. It was a fabulous gala evening and one that will be remembered by all attendees for years to come. The 10 women inductees were Barbara Jones (nominated Captain of the team), Vanessa Allegretto, Anna Peterson (Follari), Mary Greco, Diane Penny, Agnesa Giacomin, Maria Maselli, Nella Chiandotto, Maria Parlato, and Anna Prezioso. For the men, the inductees were Dino Mikolic (team captain), Anthony Parlato, Santo Pascuzzi, Daniel Samsa, Luigi Chiumello, Emilio Colla, Silvio Gatto, Stefano Chiandotto, Walter Brecevic, and John Olic.

The night also acknowledged the 2021 Life Member inductees – Adela Pase and Franco Fava presented volunteer appreciation awards to Kerrie Reitano (Redlands Club, QLD) and Sonya Velo (Veneto Club, VIC) for their services to bocce at their club, to their respective state federations and to Bocce Australia. 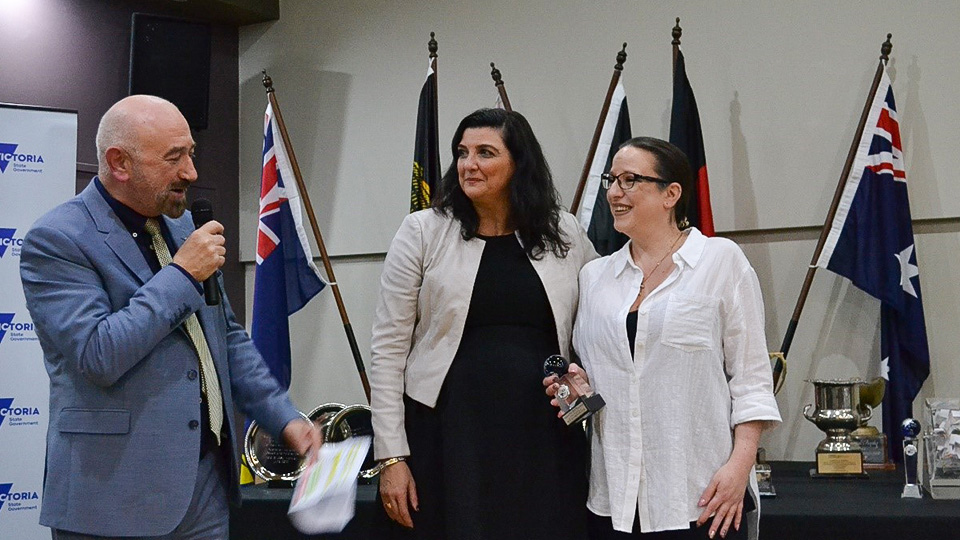 Sonia Fava reiterated that “such events are only possible thanks to the many volunteers and the financial support from sponsors such as the Victorian Government, along with supporting partners Australian Sports Commission, Latrobe City, Bocce Victoria and host club Italian Australian Sporting Club, Morwell”.

Frank Funari said: “Ever so important are our many volunteers. A big thankyou to Sally Fava and her team of volunteers who were instrumental in ensuring a smoothly run event. Also a big thanks to Sam Carbone, President of the club, along with ‘Roly’ General Manager and his staff for their impeccable hospitality and friendliness; our referees, led by Franco Fava, with assistance from Joe Maselli, Gino Colla, Claudio Placella, and Giovanni Albanese; tournament directors and assistants led by Mary Massena and assisted by Frank Palermo and David Marks. Without these many volunteers, such events are not possible and we are grateful that such people have given up their time to make this such a wonderful experience for all the participants.”

Mr Funari also thanked the Bocce Australia executive board – Tony Biancacci, Sonia Fava and Vince Di Mauro – for their dedication and support of the sport and these championships.

Finally, a big shout-out to Vinay Singh, Max Tricarico and Carlo Bunin and many others that streamed the event globally and made it possible for the many interstate and world  bocce enthusiasts to watch the Australian Bocce Nationals live. The final of the Progressive Throw was watched by over 4000 viewers and the number is still growing!

Bocce Australia congratulates all the inductees and a big thank you to all our sponsors, the volunteers, and the players!

See you next year in NSW for the bocce Men’s and Women’s Seniors Nationals 2023, the all-new Bocce Open and two new surprise categories. 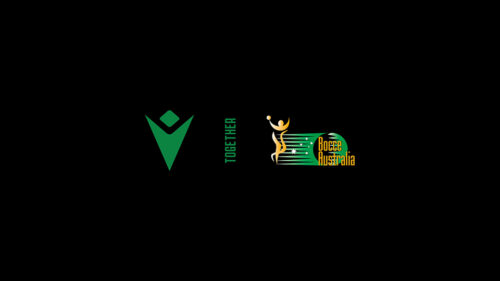 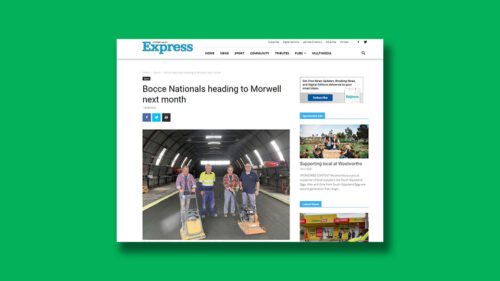 We are pleased to share that news of the Bocce Nationals has been featured in Latrobe Valley Express. Read all about it here. 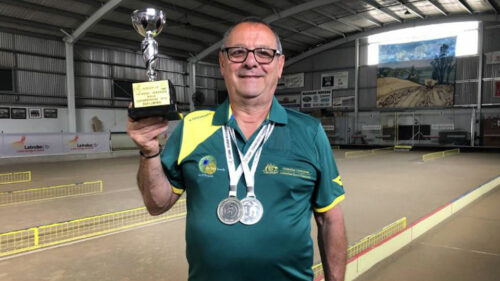 We quiz Hall of Fame player and coach Franco Fava with our ‘Top 10 questions’. Find out what he has to say in this article. 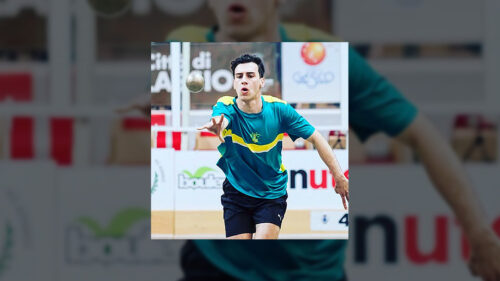 We quiz Daniel Samsa with our ‘Top 10 questions’. Find out what he has to say in this article.